Umatilla County, Oregon
A TRUTHFUL EXPOSITION
of the FACTS and FUTURE POSSIBILITIES
of the LEADING AGRICULTURAL COUNTY
of the STATE

A land of good living and great opportunity in
an ideal climate where thousands of acres
of fertile land await the coming
of the homeseeker. Weston, Umatilla County, Oregon, is an attractive, healthy and prosperous town located in the valley of Pine Creek, at the foot of the Blue Mountain range, on the Spokane branch of the O.-W. R. & N., about midway between Pendleton and Walla Walla.

Weston has a population of 594, 1920 census, showing an increase of twenty per cent in the past decade. Surrounded by a rich farming country, wherein crops never fail, it is a substantial and dependable town whose people are thrifty and whose business houses are well established and reliable. It has the usual business enterprises, excellent grade and high schools and five church buildings. It has a live Commercial Club and a good newspaper. Its leading industry is brickmaking. Common brick manufactured at the Weston yards has attained an enviable reputation throughout the Inland Empire, and practically every building in Pendleton is constructed of Weston brick.

While Weston enjoys a thriving trade from the prosperous agricultural districts, by which it is encompassed, it possesses especial advantages as a residence community. It is essentially a home town, with home-like atmosphere and home-like surroundings. Its people are friendly and amiable in their relations with one another, and the stranger within its gates is at once impressed with the air of sociability which seems to pervade the neighborhood. Weston people who seek pastures new seldom find themselves contented elsewhere, and more often than not return after the lapse of years to retie the broken threads of their local life and connections. The town has .some flourishing lodge organizations and the fraternal spirit here has been strongly developed.

Nor are the physical factors essential to an agreeable mundane existence lacking at Weston. The town has paved streets, concrete sidewalks and electric lights. It has a gravity system of waterworks affording an ample ,supply of pure mountain water. Its climate is mild, pleasing and healthful, with an absence of both excessive summer heat and excessive winter cold. Seldom do the records show a temperature of above 90 degrees in summer or below zero in winter. When they do occur, extreme temperatures are invariably of brief duration. Weston has an annual rainfall of about 20 inches, insuring abundant crops, and its elevation is 1,795 feet above sea level. Its spring and autumn months are superb, adding new significance to the expression, “Joy of living.” Weston’s environs glow with beauty when Spring has touched its setting of fields and foliage with her wagic wand, while the suggestion conveyed by the autumnal landscape is one of calm repose.

Weston was founded in the sixties by the late “Uncle Torn” Lieuallen, and is one of the oldest towns in Umatilla County. It was a stagecoach center in early days, and Pendleton’s strongest rival for the trade of a large territory, lush with bunchgrass and chiefly devoted then to the growing of sheep and cattle. Freight wagon and prairie schooner were commonplace objects on its thoroughfares; the customer coming from miles away would spend hundreds of dollars in its stores before his wants were satisfied, and its ,saloon bars swarmed with the type of rancher, cowboy, frontiersman or gambler who in those days contributed each his share to the colorful and vivid life of the Golden West. Several stage lines centered here, and the late Charley Potter, one of the famous drivers of the time, made the town daily with his “coach and six,” en route to Pendleton or Walla Walla. Weston fought several hard political battles with Pendleton for division of the county, and on one memorable occasion came within one vote in the legislature of winning the contest and with it the county seat of the new county. Completion of the Spokane branch of the railroad led to a more prosaic and settled existence, and the country changed its activities from stock growing to grain farming. Nowadays the town’s transportation needs are cared for not only by the railroad, but by numerous auto stages and auto trucks, as it is located on the state highway, which traverses its longest street and carries a never-ceasing stream of traffic.

Weston suffered in the eighties from two disastrous fires, each of which wiped out the town’s business center; and another fire destroyed the town’s biggest industry of the time, Proebstel Brothers’ Flouring Mill. From these misfortunes Weston made prompt and energetic recovery, but the foundation and growth of other towns in the east end of Umatilla County thwarted its ambition to become a metropolis. However, it qualifies as a thoroughly sound and substantial little city, and its people are confident that it will continue to steadily grow in population because of the appeal it makes to those who seek a pleasant, comfortable and congenial place of abode. 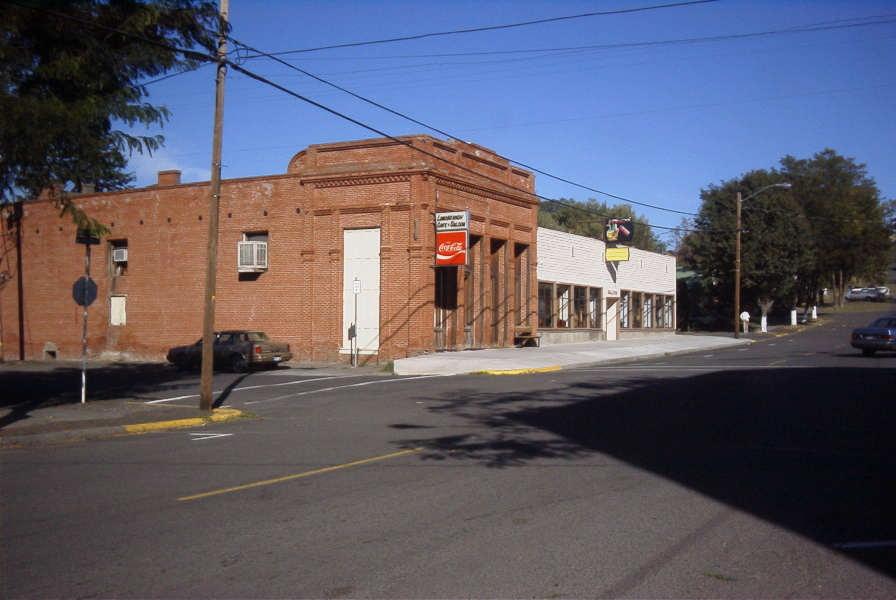