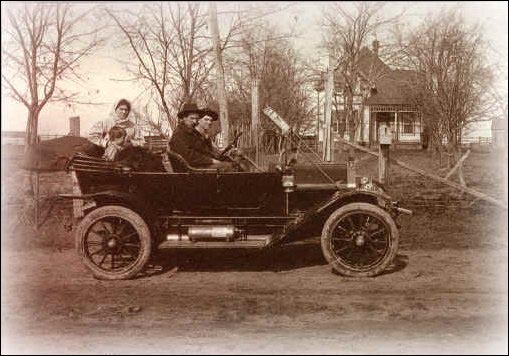 The Joe Key genealogy can be traced to 1645 in Virginia and to Northern England before that.

Hezekiah Key was the first to go west. He was born in 1847, and was part of the Confederate Army. He married in 1866 and moved to Iowa, Sacramento, and about 1875, Weston. He had 12 children, but only 6 lived to adulthood. He made a living by making and distributing whiskey to local saloons. In 1880 he acquired 160 acres from the U.S. Government, and bought 640 additional acres soon after. He returned to North Carolina for a visit, and the dream of success hit many Surrey County families like fire in their bones, including my grandfather. Families that moved here after his visit included Badgetts, Yorks, Bannisters. Many of these family’s children married Hez’s children. His son‑in‑laws had names of York, Badgett, Read and Wyland. Descendants today include Beamers, Townes, and Foxs.

In 1888, my great‑great grandfather came to Weston to visit Hez, got pneumonia and died here.

Joe and Ruth were owners of a small store in Mt. Airy, N.C. with a new baby girl, Ollie, when they decided to go to Oregon. He was 21 at the time. They came on the train directly to Weston, in March 1889, but found out the land wasn’t so available and that Hez had made it initially on whiskey. She took in laundry, they lived on credit from the store, and he got a job driving a supply wagon to a lumber camp at Tollgate. September 29, 1891, he bought 250 acres of the steepest farmland we farm, the timbered breaks of Pine Creek and unfarmable land bordering La Marr Gulch, and a small flat near the creek. He put in orchards and they were totally self‑sufficient there. Dad said he paid 0 down, the deed said he agreed to pay $6,300. Six children were born on Pine Creek, and one died there.

My Dad, Grant Key, was the youngest, born September 27, 1906. In 1909, Joe bought the McKinnon place where we live. The kids attended La Marr School, and later moved to Weston, where Dad graduated in 1925. Joe owned land on both the east and West Side of Weston. After 1 year at Oregon Agricultural College, Dad returned to the farm with his Dad and brother, Roy. After Joe’s death in November 1947, the farm was managed as an undivided estate for 2 years, with Dad in charge since Roy was not healthy.

Dad’s sister, Lola, inherited the original hills, and Dad farmed it, as well as his sister Vergie’s land. In 1964, Lola sold her land to Dad. Dad’s oldest sister, Ollie, had two sons, Clifton and Wendall Kirk, who both farmed until their deaths. Clifton’s son, Sheldon,‑ and Wendall’s son‑in‑law, Ron Perrine, farm their places.

Three of Dad’s siblings had no children, Lola lived in Portland or Long Beach, California, and had one son who died soon after his birth, and adopted 2 children, neither fanned. When Dad got to be 70, I returned to the farm to help. I am an only child, so I learned to drive combine, tractor, and did my share of spraying with a hand sprayer.

But I was really a music teacher, not a farmer. In 1982, I married Jess Thompson, and he began farming. I manage the books and about once or twice a year, I spend a day in a wheat truck or tractor, but with 4 kids, it’s hard for me to help, and Jess ‘s dad, Hank, helps him off and on. Dad’s sister, Vergie, left us her share of Grandpa’s estate in 1991, and Dad died 7 months after she did. My mother and I own his land, including the original land of 1891. We farm 1350 acres dryland in pea‑wheat rotation, all within 3 miles of Weston, all but 80 acres family land.

Most families with the Key name are descendents of Joe’s brother, Sam Key. Sam came to Oregon 6 months after Joe, returned to North Carolina, then moved to Iowa, Montana, back to Oregon (Basket Mountain), Idaho, Iowa, Basket Mountain and finally Freewater. He had 6 sons, and many many grandsons to carry on the family name. The Joe Key family has surnames of Kirk, Newbold, Hall, Perrine, King, Foster, Clark, Sincleir, and Thompson,