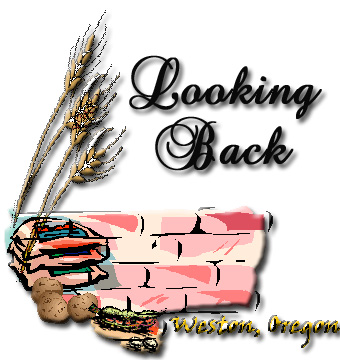 Newspapers stories and excerpts from various publications about Weston History and the people who built the community. Contributions for this page are welcome!

Culley Fire  Sim J. Culley’s store at Weston was burglarized and set on fire early Sunday morning. Heavy loss was entailed to Mr. Culley and to H. A. Brandt, owner of the two-story frame building which the store occupied.

Dunkard Church  Elder John Bonewitz and family, Ed Withers and family, Mr. Hays and three sons arrived Saturday last from Newberg, Oregon, to make their home permanently in Weston. These are German Baptists, or Dunkards, who had been on correspondence for some months with Powers & Ridenour, the real estate men, and who sent a vanguard here last summer to examine the report upon the country.

History of Weston  On May 1, 1863, five families started from Mercer county, Missouri, to a new, unsettles country. They were leaving their homes on account of the war which was destroying their farms, and also to better their condition financially.

Oregon Centennial  The beginning of history for the Weston district was in the fall of 1862 although, prior to that time wagon trains and pack train of the Hudson Bay Company passed through to other destinations. Crossing the Blue Mountains dates back to 1811.

Weston  The old Thomas and Ruckles road across the Blue mountains, the route of travel from Walla. Walla to Baker City and the Boise mines, crossed Pine creek a mile below the present town of Weston. At that point a stage station was established as early as 1863 and a hotel was kept by Taylor Green as a stopping place for teamsters, packers, emigrants and travelers. In the spring of 1866, T. T. Lieuallen bought the claim of a man who had settled on a portion of the town site.

Weston Fire 1883  An East Oregonian representative visited Weston last Friday, and learned from various sources, but principally through the courtesy of the enterprising publisher of the Leader, the details of their late calamity. The fire originated in a stable in the rear of the St. Johns hotel and soon communicated to other buildings.

Weston Fire 1911  The Hotel Royal and the row of frame buildings adjoining on the south side of Main street were totally destroyed Sunday morning by fire, leaving a gap between the postoffice and the corner brick, occupied by A. M. NorDean.

City Directory 1890  Nestled among the hills on the banks of the winding Pine creek, in a lovely valley, is situated the beautiful town of Weston.

Pioneer Picnic Memories by Noma Tucker  Every farmer knows that if you plant weed seed you get weeds but if you plant a good seed you raise a good plant. In 1892 the Umatilla County Pioneers had an idea that has carried on for 106 years – An annual reunion. The seed they planted has given us many exciting and interesting memories.

Impressions and Observations of the Journal Man   A survivor of the Whitman massacre recounts the tragic tale in an article to appear in three installments. Nancy A. Jacobs (Nancy Kees Jacobs) lives at No. 293 East 34th street with her daughter. When I interviewed her recently, she said:

History of Umatilla County by Parsons 1902 (Weston)  Nestled among the hills on the banks of Pine creek, in the richest, healthiest and most picturesque portion of Umatilla county, lies the beautiful little city of Weston, characterized for its educational advantages and achievements, wholesale moral atmosphere and social purity.

Wilhelm’s Magazine – The Coast January 1907   Where the hills of Oregon rise at the bsae of the eautiful Blue Mounts, in Umatilla County, is situated a town of prosperous and thriving people whose hearts are wrapped up in making of their part of the state as much as the resources will warrant and who are proud for the state school which is maintained at this place, people of enterprise, public spirit and progress.